Acrocanthosaurus was a carnivore. It lived in the Early Cretaceous period and inhabited North America. Its fossils have been found in places such as Oklahoma, Texas and Arkansas.

Acrocanthosaurus was a carnivorous theropod that lived in North America during the early Cretaceous period. Skeletal remains have a very high ridge of dorsal vertebrae along the spine, from which this creature’s name is derived, meaning “high-spined lizard”.

In art, the Acrocanthosaurus is often portrayed as very similar to the Allosaurus, as it is in truth an member of the Allosauroid family. Special attention is called to its tall spinal formation, sometimes depicted as a ridge of external spikes or even a dorsal fin.

All the Acrocanthosaurus illustrations below were collected from the internet. Enjoy and explore: 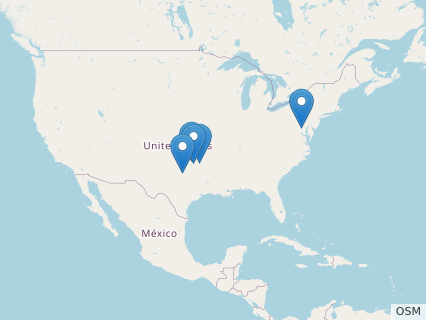 Thanks to the illustrators, PaleoDB, Dr. Christopher Scotese, and QuickChart Chart API enabling us to create this page.
Acristavus
Random Dino
Acrotholus