Camarasaurus was a herbivore. It lived in the Jurassic period and inhabited North America. Its fossils have been found in places such as Utah, Nebraska and New Mexico.

Camarasaurus was the most common sauropod to be found in North America. It existed in the late Jurassic period. Its name means “chambered lizard,” after the large spaces along its spinal column that resemble distinct chambers. It is now suspected that these spaces were actually filled with air and connected to the respiratory system. This would have reduced the overall weight of the creature to a level manageable for its trunk-like legs to carry. This feature is suspected to be common amongst large sauropods.

The largest Camarasauruses found was 75 feet long and may have weighed up to 50 tons. In artwork it is depicted with a short, protruding tail, an upright neck, and a small, boxy head. The innermost toe on each foot bears a hooked claw, which is one of this creature’s most characteristic features.

All the Camarasaurus illustrations below were collected from the internet. Enjoy and explore: 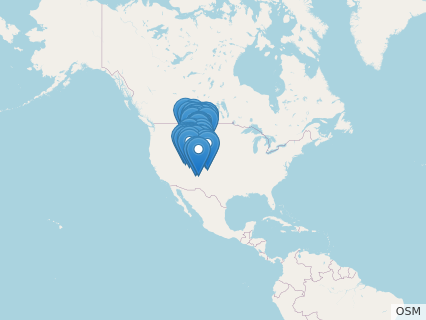 Thanks to the illustrators, PaleoDB, Dr. Christopher Scotese, and QuickChart Chart API enabling us to create this page.
Callovosaurus
Random Dino
Camarillasaurus