Coelophysis was a carnivore. It lived in the Jurassic period and inhabited Africa and North America. Its fossils have been found in places such as Texas, Yunnan (China) and Matabeleland North (Zimbabwe).

At three feet tall and nine feet long, with a body weight of some 30 pounds, Coelophysis is a dainty dinosaur from the Triassic, before heavyweight forms began to evolve. She had small, but still-useful forelimbs, and the first wishbone known to paleontology. The experts suspect that she was a sharp-eyed, fleet-footed predator of small game with excellent depth perception. There are many good samples from Ghost Ranch in New Mexico – and one distant relative from Zimbabwe in central Africa: Coelophysis rhodesiensis.

All the Coelophysis illustrations below were collected from the internet. Enjoy and explore: 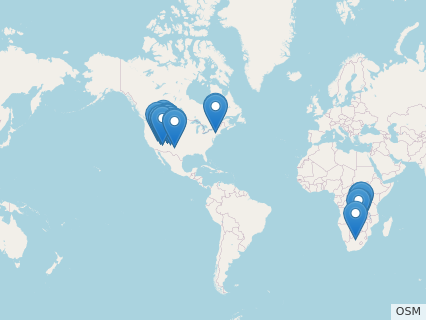 Thanks to the illustrators, PaleoDB, Dr. Christopher Scotese, and QuickChart Chart API enabling us to create this page.
Coahuilaceratops
Random Dino
Coeluroides