Hadrosaurus was a herbivore. It lived in the Cretaceous period and inhabited North America. Its fossils have been found in places such as New Jersey, Montana and North Carolina.

At the tail end of the Cretaceous, some 70 million years ago, this great beast keeled over and died. Its body must have been washed down a river into the sea, where it settled in the mud and was fossilized. But then the land rose up, and the bones were back where they started. The hulking “lizard”, with a bill shaped like duck's beak, was a native of what is now New Jersey. And in modern times, it's the official dinosaur of that state.

Dug up in 1858, it was the first large set of dinosaur remains found in the USA, and the paleontologist Joseph Leidy noted that the huge bones resembled Igauanodon fossils from England. There was a rush to mount the bones for public viewing, Parts of the skull were missing, and sculptors made several imaginative reconstructions, which were not always accurate. Later duck-billed reconstructions based on relatives were more credible.

Today, we know that New Jersey's Hadrosaurus was one of a kind. But it was among the early members of an important lineage. It has a unique, pivotal place in the dinosaur family tree, and is closely related to such later species as Maiasaura, Shantungosaurus and Edmontosaurus. Like them, it probably spent most of its waking day eating greens to maintain that massive body, 23 feet long, with a mass of 2.5 tons.

All the Hadrosaurus illustrations below were collected from the internet. Enjoy and explore: 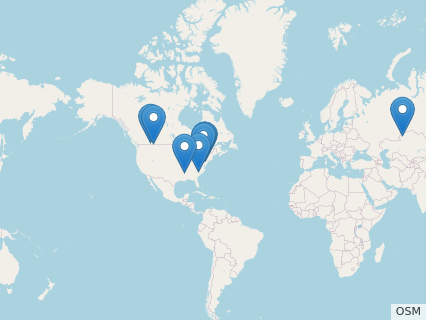 Thanks to the illustrators, PaleoDB, Dr. Christopher Scotese, and QuickChart Chart API enabling us to create this page.
Gyposaurus
Random Dino
Hagryphus