Pachycephalosaurus was a herbivore. It lived in the Cretaceous period and inhabited North America. Its fossils have been found in places such as South Dakota, Colorado and Montana.

Pachycephalosaurus is a bipedal ornithischian, most recognizable for the bowl-like crown that tops its ultra-thick skull. They were around 15 feet long from head to tail, and stood about 4 feet high at the shoulder. They were active in North America during the late Cretaceous Period, in what is now the upper midwest United States.

It was once thought that Pachycephalosaurus would ram each other head on with their skull plates as they competed for mates and territory. Further research showed that this would have been highly destructive and that their physiology didn’t adequately protect them from this kind of behavior. Although it is still thought that they used their thick skulls as a weapon, it is now believed that they most likely attacked to the side, rather than ramming targets head-on.

All the Pachycephalosaurus illustrations below were collected from the internet. Enjoy and explore: 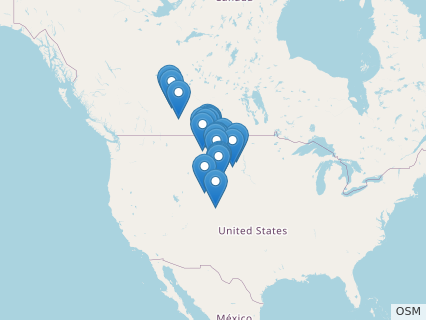 Thanks to the illustrators, PaleoDB, Dr. Christopher Scotese, and QuickChart Chart API enabling us to create this page.
Ozraptor
Random Dino
Pachyrhinosaurus