Spinosaurus was a carnivore. It lived in the Cretaceous period and inhabited Africa. Its fossils have been found in places such as Tataouine (Tunisia), Adrar (Algeria) and Béchar (Algeria).

The Spinosaurus was a truly enormous theropod of the Cretacious period, so called because of the line of spindly growths extending from its spine. It was among the largest of the theropods, if not the largest, with estimates topping out at up to 59 feet. This dwarfs even its most infamous cousin, the mighty Tyrannosaurus Rex, by a whopping 19 feet.

Spinosaurus was long thought to be a bipedal dinosaur, but recent developments have lent credence to the theory that—at least part of the time—it moved about on all fours. The function of its dorsal spines is debatable, with some researchers positing that it is for aesthetic display, and others for heat regulation, while still others see the evidence of fish in the Spinosaurus’ diet as supporting the use of a dorsal fin for swimming.

In art, the Spinosaurus may be depicted as bipedal or quadrupedal depending on the date of the work. The dorsal spines most often form a fin on the creature’s back, and its head is long and narrow, resembling that of a crocodile.

All the Spinosaurus illustrations below were collected from the internet. Enjoy and explore: 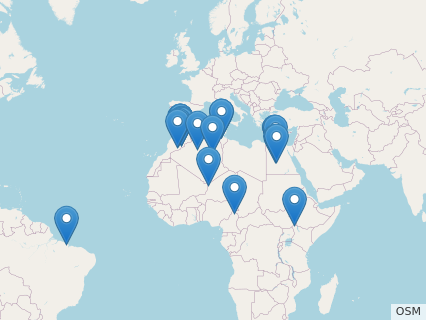 Thanks to the illustrators, PaleoDB, Dr. Christopher Scotese, and QuickChart Chart API enabling us to create this page.
Spinops
Random Dino
Spinostropheus