Triceratops was a herbivore. It lived in the Cretaceous period and inhabited North America. Its fossils have been found in places such as North Dakota, Wyoming and Saskatchewan (Canada).

Triceratops is certainly one of the most recognizable dinosaurs of all time. Active during the late Cretaceious, its name derives from its three distinct horns on its head, just below an armored crest that protects its neck and shoulders. It plods around on all fours, and was an herbivore. It probably used its formidable arsenal for defense rather than hunting live prey.

Some researchers have suggested that Triceratops’ horns aren’t necessarily weapons at all, but rather they exist to attack a mate and intimidate rivals. It has been suggested that the genus Torosaurus may, in fact, be the elder adult form of the Triceratops. In much the same way that older bucks will grow increasingly elaborate antlers, the Torosaurus has a more elaborate head crest.

All the Triceratops illustrations below were collected from the internet. Enjoy and explore: 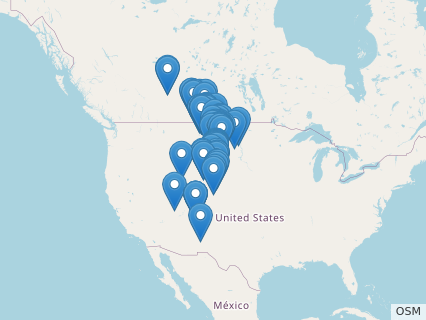 Thanks to the illustrators, PaleoDB, Dr. Christopher Scotese, and QuickChart Chart API enabling us to create this page.
Traukutitan
Random Dino
Trigonosaurus