Baryonyx was a carnivore. It lived in the Cretaceous period and inhabited Africa and Europe. Its fossils have been found in places such as Rioja (Spain), Castile and León (Spain) and England (United Kingdom).

Baryonyx was a distinctive-looking theropod of the early Cretaceous, found primarily in what is now northern Europe. Its name translates from the latin as “heavy claw”, and it indeed had a large, heavy claw at the end of its forelimbs. Its appearance is also marked by a long, balancing tail and a relatively small skull for a theropod, which tapers into a very narrow jaw.

In artwork, Baryonyx is often depicted making use of its outsized claws to catch and devour fish. It can be recognized by its crocodilian head.

All the Baryonyx illustrations below were collected from the internet. Enjoy and explore: 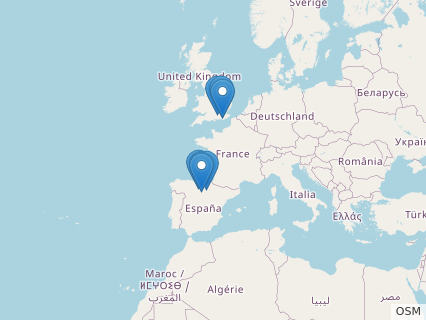 Thanks to the illustrators, PaleoDB, Dr. Christopher Scotese, and QuickChart Chart API enabling us to create this page.
Barsboldia
Random Dino
Batrachognathus