Ceratops was a herbivore. It lived in the Cretaceous period and inhabited North America. Its fossils have been found in places such as New Mexico and Montana.

Horned and frilled, this was a large family of Cretaceous dinosaurs. The most familiar is Triceratops, the three-horned species commonly found as a plastic model in toy shops. But there are many more species in this formidable herbivore family, who chose to face trouble head-on with an array of defensive and offensive weapons. The great-granddaddy of the line has yet to be discovered, but we know that he must have lived in central Asia about 100 million years ago.

There is evidence that early frilled and horned dinosaurs were preyed upon by large theropods such as T. Rex. One dramatic duel to the death between a ceratopsian and a velociraptor resulted in a unique double-fossil record. As the aeons went by, the ceratops family spread out into a great family tree of tough survivors. All of them had bony defensive frills to protect the neck and throat, and long forward-facing horns in various patterns.

Ceratopsians ranged in size up to specimens which topped out at 16 tons and 30 feet. There is evidence that they grazed and travelled in herds. All of these fossils come from sites in North America, which fits the theory that the ceratopsians walked over from Asia during Cretaceous times, on a land bridge used millions of years later by Mankind. A paleontologist can still build a flourishing career on the ceratopsian family alone, in all its fascinating variety.

All the Ceratops illustrations below were collected from the internet. Enjoy and explore: 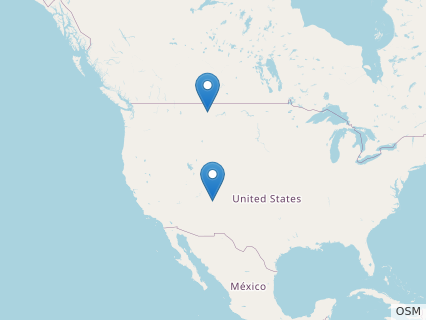 Thanks to the illustrators, PaleoDB, Dr. Christopher Scotese, and QuickChart Chart API enabling us to create this page.
Ceratonykus
Random Dino
Ceratosaurus