Mosasaurus was a carnivore. It lived in the Cretaceous period and inhabited Europe and North America. Its fossils have been found in places such as Centre-Loire Valley (France), South Dakota and Nebraska.

The Mosasaurus was an enormous aquatic lizard of the late Cretaceous, dwelling in what would become the North Atlantic Ocean. It is named for the Meuse river where the first fossil specimen was discovered.

The largest species of the Mosasaur species could grow to over 50 feet long, with a streamlined skull bristling with teeth, a barrel like trunk for its midsection, and a long, powerful tail. It was an aquatic reptile, not a fish, as evidenced by its two sets of fins. Early paleontologists initially suspected that the Mosasaur was an ancient crocodile or monitor, but eventually it became clear that it was a different species altogether, unrelated to any modern animal.

Mosasaurus lived near the surface of the water, since it breathed air, much as whales do. They were carnivores, feeding on whatever edible animals were unfortunate enough to cross their path - likely fish, plesiosaurs, and even other Mosasaurs!

All the Mosasaurus illustrations below were collected from the internet. Enjoy and explore: 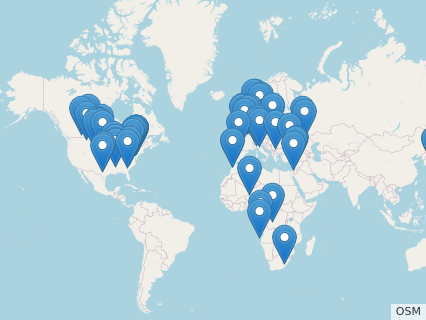 Thanks to the illustrators, PaleoDB, Dr. Christopher Scotese, and QuickChart Chart API enabling us to create this page.
Mosaiceratops
Random Dino
Muraenosaurus