Plesiosaurus was a plesiosaur, a type of marine reptile. It was not a dinosaur, though it coexisted with many dinosaurs. The first Plesiosaurus fossil was discovered in 1821.

Plesiosaurus was an aquatic reptile of the Jurassic period. It used four fins and a short broad tail for mobility, and had a serpentine neck almost as long as the rest of its body, with a small head at the end. They were usually about 11 feet in length, full grown.

Plesiosaurus is just one genus of many that form the family Plesiosauriae. In artistic depictions, many artists do not draw a distinction between these types of Plesiosaur. Additional, much of the art depicting the Plesiosaurus is heavily influenced by cryptozoid mythology surrounding the Loch Ness Monster and other similar creatures.

All the Plesiosaurus illustrations below were collected from the internet. Enjoy and explore: 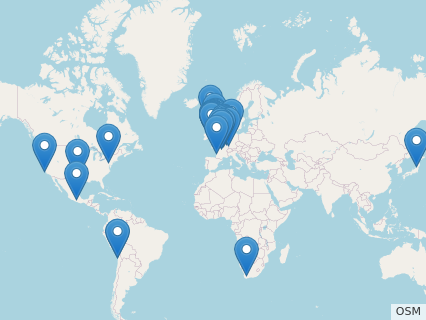 Plesiosaurus was described by the following scientific paper(s):

Thanks to the illustrators, PaleoDB, Dr. Christopher Scotese, and QuickChart Chart API enabling us to create this page.
Plesiopterys
Random Dino
Pleurocoelus