Stegosaurus was a herbivore. It lived in the Jurassic period and inhabited Europe and North America. Its fossils have been found in places such as Utah, Xinjiang (China) and South Dakota.

Among the most famous of all dinosaurs, the Stegosaurus is recognized chiefly for the two rows of armored plates that ran down the length of its spine from its head to the tip of its tail. It had a narrow, tapering head held close to the ground, and its forelegs were considerably shorter than its hindlegs.

As with the other more popular dinosaurs, the depiction of the Stegosaurus in art has changed considerably over the years as more and more new information has come to light. In early illustrations, the gait of the Stegosaurus was more squat, and it carried its tail low to the ground; it is now known that it walked with its hind legs held straighter, and its tail high in the air. Newer illustrations will sometimes incorporate these changes in understanding.

The plates that line the Stegosaurus’ back have inspired much debate as to their function. While they were initially thought to serve as armored protection for the creature’s back, some alternative theories have recently been proposed, ranging from an aesthetic display to heat regulation.

All the Stegosaurus illustrations below were collected from the internet. Enjoy and explore: 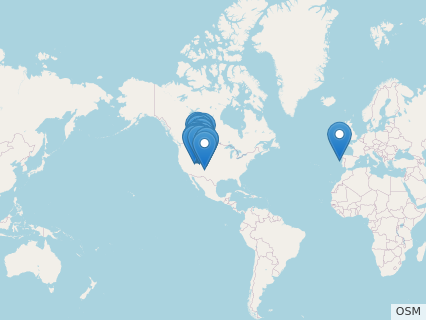 Thanks to the illustrators, PaleoDB, Dr. Christopher Scotese, and QuickChart Chart API enabling us to create this page.
Stegosaurides
Random Dino
Stenonychosaurus