Tyrannosaurus was a carnivore. It lived in the Cretaceous period and inhabited North America. Its fossils have been found in places such as Utah, Coahuila (Mexico) and Montana.

Undoubtedly the most famous of all dinosaurs to capture the public imagination, the Tyrannosaurus Rex (“tyrant lizard king”) was a powerful predator of the Cretaceous period. The largest complete skeletal specimen of a T. Rex is 40 feet long.

Artistic depictions of the Tyrannosaur vary immensely, mainly because it is perhaps the most frequently depicted of all dinosaurs. While nearly all artists showcase its powerful three-toed legs, its long tail, its enormous crushing jaws and its comically undersized forelimbs, there is much debate as to the outer appearance of the creature.

In recent developments, it has become increasingly likely that the T. Rex had feathers–or at least feather-like filaments–covering much of its body. The most cutting-edge artistic depictions of Tyrannosaurus (and indeed many other dinosaurs) now emphasize their birdlike qualities. It is still common to see them shown as more reptilian in character; this is how it was shown in most books and films prior to the revelation about the feathers.

All the Tyrannosaurus illustrations below were collected from the internet. Enjoy and explore: 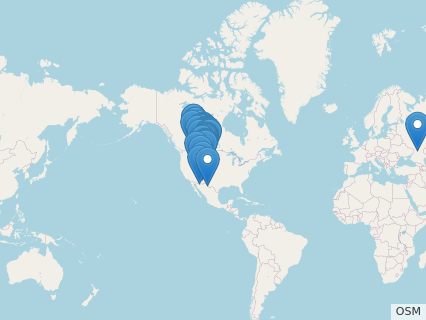 Thanks to the illustrators, PaleoDB, Dr. Christopher Scotese, and QuickChart Chart API enabling us to create this page.
Tylocephale
Random Dino
Tyrannotitan