Velociraptor was a carnivore. It lived in the Cretaceous period and inhabited Asia. Its fossils have been found in places such as Alberta (Canada), Inner Mongolia (China) and Batken Region (Kyrgyzstan).

Velociraptor is a genus of carnivorous theropod. It was comparable in size to a contemporary turkey, although with a longer tail. It was found in what is today known as Mongolia.

Velociraptor had sharp teeth, distinctive feet bearing toes with one oversized hooking claw, and a long tail providing a counterbalance. It is now known that Velociraptors had feathers, lending them the appearance of a vicious primordial turkey. However, more reptilian depictions of scaled Velociraptors are still common due to their ubiquity in popular culture.

In artistic renditions and film media, Velociraptor is usually depicted as larger than the actual Velociraptor Mongoliensis; something more akin to the size of Deinonychus or Utahraptor, which are related but larger species of Theropod.

All the Velociraptor illustrations below were collected from the internet. Enjoy and explore: 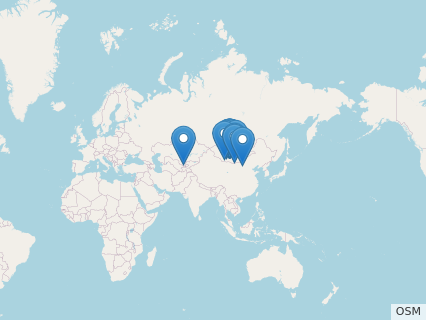 Thanks to the illustrators, PaleoDB, Dr. Christopher Scotese, and QuickChart Chart API enabling us to create this page.
Velocipes
Random Dino
Velocisaurus